A company that performs work on Dominion voting machines in Michigan has informed election officials that it plans to change batteries on all voting machines in the state, a process that “is problematic because this would erase data” on those machines, an attorney warned. 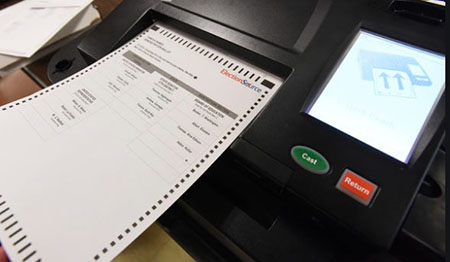 Attorney Stephanie Lambert told Jim Hoft and Patty McMurray from The Gateway Pundit and 100% FedUp that she will be filing a lawsuit:

“I’ve been working closely with Matt DePerno and with other attorneys and experts, like I said, and we’ve obtained a lot of evidence,” Lambert said. “In fact there’s going to be a lawsuit filed in the very near future against Election Source which is a contractor to Dominion. Matt DePerno sent a cease and desist letter to Election Source today because there was a letter sent out by Election Source to all of the clerks in Michigan stating that they’re coming to do preventative updates regarding removing a battery in most of the election equipment which is problematic because this would erase data [on those machines]. That’s one piece of what’s happening with Election Source.”

Gateway Pundit’s Joe Hoft noted: “Removing batteries from voting machines in Michigan will end up destroying evidence on these machines from the 2020 Election. This is against the law and should not happen until 22 months have passed since the election.”

Lambert also reported that “our experts have found security breaches within the Michigan election.”

In an interview with 100% FedUp and Gateway Pundit, Lambert said she sent a Gmail to the White House following the November election with the title “2020 election fraud” and Google would not let it go through. Lambert said she reached out to Sidney Powell and went to work for attorneys looking at alleged election fraud.