Recently released crime data for 2016 from the FBI shows that most blacks who are murder victims were killed by other blacks, statistics that directly counters the narrative from Black Lives Matter (BLM) that police are gunning down unarmed black men at an alarming rate.

“The data flies in the face of the rhetoric that professional athletes rehearsed in revived Black Lives Matter protests,” Heather Mac Donald an analyst at the Manhattan Institute, wrote for City-Journal.org. 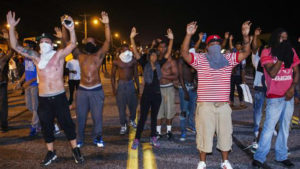 “Who is killing these black victims? Not whites, and not the police, but other blacks,” MacDonald wrote.

According to a report by The Washington Post, police in 2016 fatally shot 233 blacks, the vast majority of whom were “armed and dangerous.” The Post categorized 16 black male victims of police shootings as “unarmed.”

“That classification masks assaults against officers and violent resistance to arrest,” MacDonald wrote.

MacDonald pointed to “the Ferguson Effect” as a main reason for the increase.

“Cops are backing off of proactive policing in high-crime minority neighborhoods, and criminals are becoming emboldened. Having been told incessantly by politicians, the media, and Black Lives Matter activists that they are bigoted for getting out of their cars and questioning someone loitering on a known drug corner at 2 a.m., many officers are instead just driving by. Such stops are discretionary; cops don’t have to make them.”

MacDonald continued: “When political elites demonize the police for just such proactive policing, we shouldn’t be surprised when cops get the message and do less of it.”

A Pew Research poll in January found that 72 percent of American police officers say that they and their colleagues are now less willing to stop and question suspicious persons.

“If there is a bias in police shootings, it works in favor of blacks and against whites,” MacDonald wrote.

“That truth has not stopped the ongoing demonization of the police – including, now, by many of the country’s ignorant professional athletes. The toll will be felt, as always, in the inner city, by the thousands of law-abiding people there who desperately want more police protection.”