The Buffalo Bills have an 11-3 record and are set next month to host their first NFL playoff game since January 1997.

Because of Democrat Gov. Andrew Cuomo’s coronavirus lockdown orders, fans have been prohibited from attending all of the Bills’ home games this season. 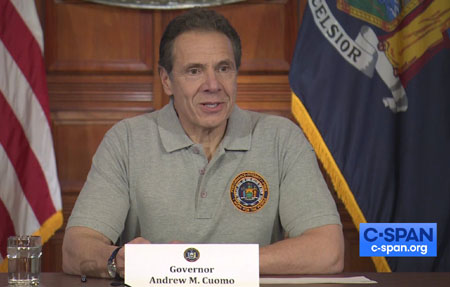 Cuomo said Sunday that he would like to be at Bills Stadium when the Bills host a playoff game in January.

“I want to attend a Bills game,” he said on a conference call, the New York Post reported.

Following the Bills’ playoff-clinching win in Denver on Saturday, thousands of raucous fans greeted the team at the airport early Sunday morning — and Cuomo scolded them, saying “large gatherings should concern everyone.”

Which prompted some Bills fans to wonder if Cuomo would have the nerve to attend the playoff game in a private luxury box while continuing to ban fans from the stadium in Orchard Park.

This is the same governor who has written a book congratulating himself for what he sees as his heroic response to the coronavirus outbreak.

If that’s not next-level egotism, how about this: Cuomo in his Monday briefing said that “Santa’s going to be good to me this year, I can tell. I worked hard this year.”

Cuomo made the comments after saying that he had granted a “quarantine waiver” for Santa, but he noted that Santa would be required to wear a mask while delivering gifts this year.

“The egomaniac that Gov. Cuomo has either become or is finally displaying is so sickening,” Fox Business host Charles Payne told “Fox & Friends.”

Payne said that New York state ranked #2 in coronavirus-related bankruptcies and death rates. Payne explained that there were 185 deaths for every 100,000 people in New York.

“No, he doesn’t get anything from Santa. He should get a bunch of coal and some humility,” Payne said.

Another issue is whether anyone in New York would even want to party with Cuomo. Restaurant owners in New York City certainly don’t.

After the governor earlier this month again issued an order banning indoor dining, a group of New York City restaurants joined together to ban Cuomo from dining at their establishments.

“He can eat at some shitty roadside diner outside of Albany but he will not be served anywhere in New York City, known universally as the world’s greatest dining destination! If he has to use the restroom he can go pee on my street-corner,” said bar owner Larry Baird.

Members of a Facebook group by the name of “NYC Restaurant Open,” which is comprised of several restaurant and bar owners from the city, have signaled support for the Cuomo ban.

“He can dine at Gracie Mansion if he wants hospitality in Manhattan,” one member of the group said. “He ain’t getting it here!”

Politico explains reality to its reporters: Border surge is NOT a 'crisis'
Read more