Sen. Ted Cruz on Wednesday introduced legislation that would hold state and local officials liable when rioters establish lawless “autonomous zones” and officials abdicate their duty to protect their citizens. 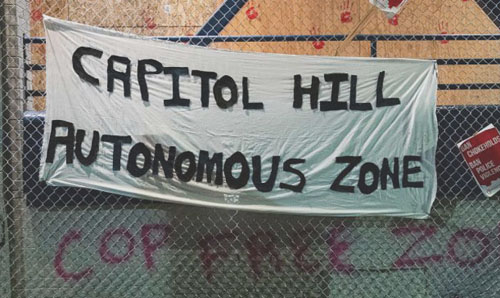 “The legislation would create a new cause of action to empower the victims of violence in so-called autonomous zones to take legal action against lawmakers who tolerate or encourage such zones. In addition, the RECLAIM Act removes or limits federal grant assistance for local governments that bar police forces from protecting citizens or their property inside law enforcement free zones,” Cruz said.

The Texas Republican said the RECLAIM Act (Restitution for Economic losses Caused by Leaders who Allow Insurrection and Mayhem) would allow for treble damages, enabling plaintiffs in autonomous zones to recover triple the amount of actual damages caused to his or her property that were sustained as a result of rioting.

“Over the past eight weeks, Antifa thugs have assaulted cities all across America and established so-called ‘autonomous zones’ where rioters destroy businesses, endanger the lives of law enforcement officers, and allow violence to flourish. Democrat city officials have allowed this violent mob rule, and they need to be held accountable for the lives lost and the millions of dollars in damages that have been incurred by lawless autonomous zone anarchists. We need leaders to stand with the men and women in law enforcement and defend America.”

“As public officials, our first responsibility is to protect our fellow citizens. Any politician who willfully ignores that sacred duty is in gross violation of that oath. It’s time to restore civility, hold government officials accountable, and take our cities back.”

See the entire text of the Reclaim Act here