It is estimated that about 60 percent of restaurants in New York could go out of business by the end of the year due to Gov. Andrew Cuomo’s lockdown orders.

Contact tracing data released by Cuomo on Friday showed restaurants and bars accounted for only 1.43 percent off all covid cases in New York during the so-called “second surge” from the beginning of September through the end of November. 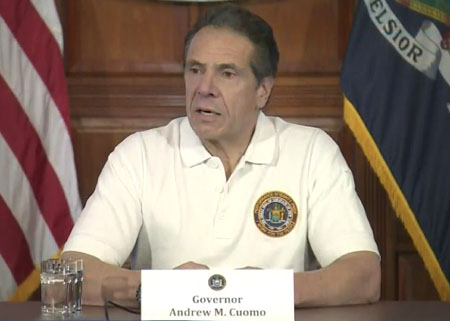 “None of the sectors of the economy targeted by the government played any significant role whatsoever in covid spread, and government quarantine policy seemed to play a dominant role in the large majority of transmissions,” Rochester WHAM1180 radio host Bob Lonsberry noted. “Translation: We might have been better off in every way if the government had just stayed out of it.”

Restaurants and bars “were traced to a tiny fraction of the cases,” Lonsberry noted. “And the governor, having this data, still imposed a color-coded scheme that further burdened and restricted both bars and restaurants. He knew they were innocent, and he buried them some more.”

The contact tracing data show that hair salons and barber shops were involved in the transmission of just .14 percent of all New York covid cases between September and November.

“And yet orange zone barbershops and salons were completely closed down by the governor’s order,” Lonsberry noted. “They had nothing to do with spreading covid, as his own numbers showed, but he screwed them anyway.”

Gyms in New York were connected with the transmission of only .06 percent of cases of covid. “And yet in the orange zones” Cuomo “shut them down completely,” Lonsberry noted.

“Think of the tens of thousands of workers out of a job because of the unnecessary restrictions on salons, barbershops, gyms, restaurants and bars – industries that account for just 1.63 percent of New York’s covid cases,” Lonsberry continued. “How is that not a crime? How does that not have the state up in arms? How can the state legislature and county leaders be silent in the face of such an insane injustice?”

Cuomo’s own data show that covid isn’t being passed in the industries the governor has shut down and destroyed. It also is not being transmitted in houses of worship which have also been all but shuttered under the governor’s lockdown orders. Contact tracing data show New York houses of worship accounted for just .69 percent of “second surge” cases.

Travelers into or out of New York accounted for 1.06 percent. Lonsberry noted that Cuomo “sent the National Guard to the airports to hassle them, and for a few months had most of the nation on a restricted list.”

Teachers and other school employees, as well as those working in higher education, accounted for – as an employment-related transmission – 1.5 percent of New York’s covid cases. College students, who came back to campus in September, were 2.02 percent of cases. Public school students were all less than half of one percent, as were prisons. Frontline news media and motel workers were both .02 percent.

First responders, including military, were 1 percent of transmissions.

Patients and residents at hospitals and nursing homes and all health care providers and institution employees combined for 7.81 percent of covid transmissions.

So, where are most cases transmitted?

At home. Nearly 74 percent of all the covid cases in New York between September and November were passed in the home.

“Though ominously described by many public health officials as ‘private gatherings,’ a way to blame people for their own illness by implying that their social choices have sickened them, these are almost exclusively in-home, in-family transmissions,” Lonsberry noted. “And quarantines play a big part in that. One member of a family gets covid, that person is quarantined at home, and the whole family gets covid.”

Lonsberry continued: “It is clear that society is getting it right in the workplace and in schools, has some challenges in health-care settings, but is getting decimated in the home. And yet the governor will today announce new restrictions and rules on places which his own statistics show are not covid threats.

“That’s the lunacy New York suffers under. A governor who is proving every day that the cure is worse than the disease.”