“If I see a #MAGA hat, I’ll treat it like a Klan hood,” someone with the Twitter handle “liberalVeteran” posted last month.

The “tolerant” Left has painted a bullseye on supporters of President Donald Trump, a columnist noted. 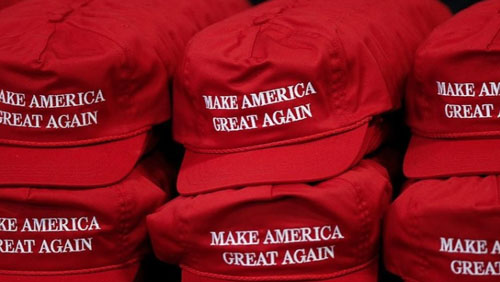 Leftists and their allies in the media “continuously fan the flames of partisan fanaticism in a dangerous manner that is going to get somebody killed,” columnist Joe Schaeffer wrote for LibertyNation.com on Feb. 21.

Wearing MAGA hats, Terry Pierce and his wife were shopping at a Sam’s Club in Bowling Green, Kentucky when they noticed another customer flipping them the bird. When they asked the man, James Phillips, if he did what they thought he did, he let them know it was because of their hats. They then responded in kind, and the man promptly pulled a gun, pointed it at them, and said, “This is a good day for you to die.”

As Pierce told The Gateway Pundit, “I have every right to support my country and my president – and I proudly wear this hat as a symbol of trying to help MAKE AMERICA GREAT AGAIN!”

Earlier this month, a Massachusetts woman attacked a customer at a Mexican restaurant in Cape Cod who was wearing a MAGA hat. The woman, Rosaine Santos, a 41-year-old immigrant from Brazil, was arrested and charged with disorderly conduct and assault and battery.

Santos reportedly told police that the man in the MAGA hat should not have been allowed to eat at a Mexican restaurant because of his support for President Donald Trump.

Santos told Boston 25 that while she regrets her actions, she was the victim in the whole incident and that she was provoked. “I had a little bit to drink maybe that’s the reason that I couldn’t walk away but being discriminated for so many times in my life, I just had to stand up for myself. He’s not a victim. I am the victim. I have been bullied, OK?”

Americans shouldn’t hold their breath “waiting for Trump opponents and their media friends to loudly and repeatedly decry” these types of attacks, Schaeffer wrote. “They are far too busy stirring up that very hatred every chance they get.”

Columnist Robin Givhan at The Washington Post sees the MAGA hat as emblematic of racial hatred. “The hat has become a symbol of us versus them, of exclusion and suspicion, of garrulous narcissism, of white male privilege, of violence and hate,” she wrote in January, shortly after the incident at the March for Life involving the Covington, Kentucky, high school kids. “For minorities and the disenfranchised, it can spark a kind of gut-level disgust that brings ancestral ghosts to the fore. And here, in 2019, their painful past is present.”

Joining the rush to judgment on the Covington incident, actress Alyssa Milano tweeted: “The red MAGA hat is the new white hood.”

In January, CNN hosts Chris Cuomo and Don Lemon painted MAGA backers as vile racists. After Cuomo compared the red hats to T-shirts that read, “I hate black people,” Lemon chimed in, saying, “Life is not in a vacuum. That hat means a lot of things. Maybe that hat means the Central Park Five to people, maybe it means birtherism to people, maybe it means Mexicans are rapists to people. You cannot erase those things from the story of that hat.”

Schaeffer wrote: “These two buffoons project evil onto people wearing clothing in support of a sitting president. This is precisely the kind of grossly inappropriate framing that leads to violence. A couple in Kentucky wears MAGA hats, and to Lemon they truly are akin to monstrous bigots. Then a man who dislikes MAGA hats pulls a gun on them. Will Cuomo and Lemon, who constantly condemn what they fictitiously see as Trump’s hate mongering, express their regret over the shockingly reckless tone of their own words?”

Givhan, Milano, Cuomo, Lemon and their ilk have “shamelessly slapped a bullseye on the backs of regular citizens who happen to be Trump proponents with their slanderous smears,” Schaeffer wrote. “Once again, a patently obvious truism is proven. When it comes to ‘ugly and divisive,’ nothing beats a progressive fighting ‘intolerance.’ ”