In congressional testimony last week, anti-Trump FBI agent Peter Strzok described how the Trump dossier made its way from Hillary Clinton’s team to the FBI, which relied on the unverified dossier heavily in its Russia investigation. 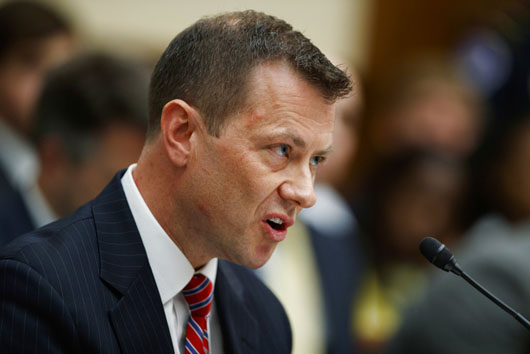 Strzok said the FBI received the dossier, which was paid for by the Clinton campaign and Democratic National Committee (DNC), from Associate Attorney General Bruce Ohr.

Strzok’s testimony is significant “because it confirms an unusual and continuing channel for collusion accusations that started outside the government with anti-Trump people and reached Ohr at the Justice Department and then the FBI,” Rowan Scarborough noted in a July 15 report for The Washington Times.

“The arrangement suggests that the FBI used the partisan, anti-Trump dossier and was eager to receive its episodic chapters from June to December 2016,” Scarborough wrote.

Strzok testified that he couldn’t specify the “various places” where the FBI received dossier information or when he learned that Clinton had funded it.

But he did confirm: “I have been directed that I may state that I have read the dossier, that I read the dossier as it came in in parts and pieces to the FBI. Ohr gave the FBI documents, which included material that I believe originated from (Christopher) Steele.”

Rep. Jim Jordan said that “This is the first time to my knowledge that the FBI has admitted they got parts of the dossier from Bruce Ohr, a fellow DOJ employee. That’s scary. Bruce Ohr, the fourth-ranking official at the Department of Justice, his wife works for Fusion GPS in the summer. He gets information and passed it to the FBI. That becomes the basis to spy on the Trump campaign, plain and simple. This is the first time to my knowledge the FBI has admitted that, and it was good that we got some of that information out today.”