The coronavirus originated in Wuhan, China, and China was held responsible by the Trump Administration for the spread of the virus worldwide. 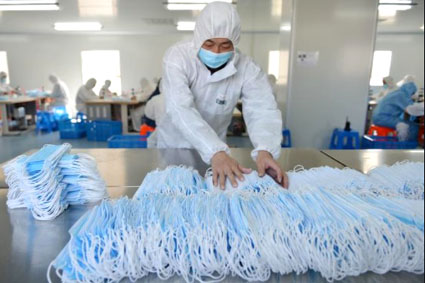 Following Biden’s mandate, the Global Times propaganda outlet reported that Chinese manufacturers of masks and other personal protective equipment (PPE) are receiving a massive amount of orders from the United States.

According to the report, American buyers may place more orders for the Chinese pandemic equipment in a month than they did in all of 2020.

“We have faith that the new U.S. government will treat China’s epidemic material suppliers with a more objective attitude, unlike its predecessor,” said Chinese mask producer Huang Yuhao.

In June, a Chinese manufacturer was charged with producing and exporting to the United States nearly half a million misbranded and defective masks that falsely purported to be N95 respirators.

Thousands of Chinese manufactured testing kits and medical masks were also found to be below standard or defective, according to authorities in Spain, Turkey and the Netherlands.

Under Biden’s mast mandate, “federal lands” means any piece of land that is under the control of the executive branch.

That includes the about 500 million acres managed by the Department of the Interior, including the 423 units under National Park Service control. Almost all documented coronavirus transmissions have occurred indoors.

National parks and monuments have encouraged visitors to wear face coverings during the pandemic, but haven’t required them.

Three headlines from the Sacramento Bee sum up the situation at national parks:

Masks, other trash piling up at one of Utah’s most popular national parks, park says

Masks are flying off people’s faces and into Yellowstone geysers, officials say