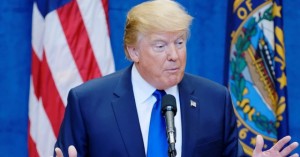 Special to WorldTribune.com By Sol W. Sanders Donald Trump’s much ballyhooed foreign policy speech was a minor disaster. Not only did Trump fail to set out a succinct foreign policy philosophy and agenda, but the speech itself [even with a teleprompter] was a failure in his effort to move to a more “presidential” persona. One […]

The western pillars that have supported Israel are crumbling

Special to WorldTribune.com By Norman Bailey The U.S. and Europe — the traditional pillars of Israeli foreign diplomatic and economic relations — are crumbling. Since Israel’s independence, its most important economic and financial partners have been in Europe and the U.S. In the past few years, however, this situation has changed dramatically. On the plus […]

Iranian President Hassan Rouhani has predicted Iran will undergo an “economic boom” with the lifting of international sanctions. Iran and six world powers secured a deal in July 2015 under which Tehran pledged to curtail elements of its nuclear program in exchange for the lifting of international sanctions. “The government is running the country under […]

Special to WorldTribune.com Disgruntled youth, most said to be Muslim, burned 804 vehicles in France on New Year’s Eve as a recent trend continued. In the European media, such incidents are typically described as “youth violence” as a synonym for actions attributed by security officials to militant Islamists. The 14.5 percent decrease in vehicles burned […]