LONDON — South Sudan has been planning an offensive against its northern neighbor said to have backed and exploited the rebellion in South Sudan. 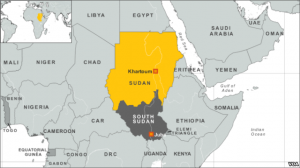 They said SPLM, which controls the government and military, has determined that the Bashir regime was supporting the revolt in South Sudan and intensifying border attacks.

“Khartoum has clearly been exploiting this crisis,” an official said.

Officials said the Sudanese Air Force has been conducting nearly daily attacks along the border with South Sudan. They said this included the border province of South Kordofan, where the Sudanese military sustained a defeat in December 2013.

“We can assure everybody that we will counter-attack,” SPLM secretary-general Yassir Arman said.

In late 2013, Juba and Khartoum signed a ceasefire agreement under
international auspices. But the Bashir regime continued to accuse South
Sudan of supporting rebels in Sudan’s Darfour province.