RAMALLAH — A clan that has dominated the Hamas movement in the southern West Bank has emerged as a focal point for an Israeli response to the killings of three teenagers.

Palestinian sources said Hamas has come under the influence of the powerful Qawasmeh clan in the Hebron area of the southern West Bank. They said Qawasmeh, with an estimated 10,000 members, controlled commerce as well as gun-running in the region as well as supplied operatives to Hamas’ revived military wing. 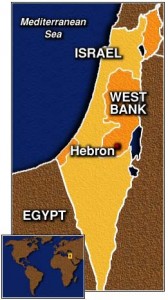 “Very little happens in Hebron without Qawasmeh,” a source said. “They
are a powerful clan, with a very aggressive element that acts like a mafia.”

The clan was highlighted during the investigation of the abduction and
killing of three Israeli teenagers, found after a two week search on June
30. One of the suspects identified by Israel was Marwan Qawasmeh, a
29-year-old who rose to become a leading Hamas operative in Hebron.

Israel has been examining options to retaliate for the
alleged Hamas abduction and killing of the three Jewish teenagers.

Officials said Prime Minister Benjamin Netanyahu has been meeting senior
ministers as well as the heads of the intelligence community in an effort to
respond to the killing of three teenagers, one of them an American, outside
their school on June 12.

On June 30, the Israel Army found the mutilated
bodies of the three in a cave near the southern West Bank city of Hebron.
“They were murdered in cold blood by human animals,” Netanyahu said.

Officials said the Palestinian Authority cooperated in the investigation
and helped identify two Hamas suspects. The two suspects, both from Hebron,
were said to have disappeared within 24 hours of the abduction.

The three teenagers were abducted and killed within minutes of their
entry into a sedan with Israeli license plates that stopped outside their
school south of Bethlehem.

Officials said the assessment of the intelligence
community was that the Hamas operatives, identified by Israel as Amer Abu
Aisha and Marwan Qawasmeh, disposed of the bodies near the Jewish community
of Karmei Tzur.

So far, neither Abu Aisha nor Qawasmeh has been captured. Both were
identified as Hamas operatives who spent time in Israeli prisons. Hours
after the bodies of the teenagers were found, the Israel Army blew up a
portion of Abu Aisha’s and Qawasmeh’s house in Hebron.

“Our forces, together with people from across the security service and
the police are continuing and will continue the search for the kidnappers,
the terrorists from Hamas, as long as is required,” Maj. Gen. Nitzan Alon,
head of the army’s Central Command, said.

In Washington, U.S. President Barack Obama said he condemned the killing
of the three Israelis. Obama also urged both Israel and Hamas to avoid an
escalation.

“I also urge all parties to refrain from steps that could further
destabilize the situation,” Obama said.

Shlomi Eldar, who covers Palestinian affairs for an Israeli television network,
told the London-based Al Monitor that Qawasmeh was part of a clan faction
that identifies with Hamas but organizes operations without the approval of the Hamas leadership. He
said Qawasmeh became the “dominant figure” in the clan after his relative,
Imad, was arrested and sentenced by Israel in 2003 to life.

“At least 15 members of the family were killed during the second
Intifada, nine of them while committing suicide attacks against Israel,”
Eldar said. “All of the terrorists lived in the Abu Qatila neighborhood,
within a radius of less than one kilometer from one another. Whenever the
head of the terrorist organization within the clan was assassinated or
arrested by Israel, one of his brothers or cousins was selected to replace him.”

The sources said the Qawasmeh clan had for decades dominated the Fatah
movement in the southern West Bank. But over the last decade, younger
clan members joined Hamas and undermined control by the Palestinian
Authority around Hebron.

“Qawasmeh operates by its own rules and is very similar to Bedouin
tribes,” the source said. “The rule is if you hurt me, I’ll hurt you
regardless of the consequences.”

The sources said Hamas failed to stop operations by Qawasmeh
that shattered informal ceasefires with Israel. They said Hamas did not want
to risk an internecine war in the southern West Bank that would threaten the
movement.

“The truth is that there is a secret military wing of Hamas that acts
without authorization from the political leadership, at least the ones who
are known,” another Palestinian source said. “This makes it very difficult
to say for certain whether the Qawasmeh attacks were ordered by Hamas.”