We know very little about the beginnings of mankind. But we know a great deal about the life of mankind in the past three millennia from its writings, paintings (recall the Italy of the Renaissance), its printed sources, and about its recent history from its radio broadcasting and now from the Internet.

In the 19th century, Marx began to propagate his theory, according to which those running private enterprises were criminals: they paid their workers less than they profited from the sales of goods their workers produced, and pocketed the difference, as a result of which some “capitalists” lived as the kings of old, while their workers were near death from hunger and other aspects of poverty. 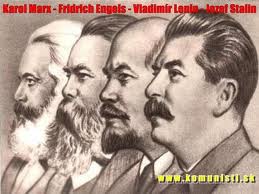 As a result, when the WWI was over, a new society was created in Russia in the autumn of 1917 with the help of those soldiers who were tired of fighting the unpopular war and turned their guns against the Russian pre-October 1917 government. The soldiers adopted that fairy tale of the “world’s greatest thinker” Karl Marx. After that German genius, came others: the Russian genius Lenin, and then the Georgian genius Stalin, who became the ruler of Russia not unlike the old Russian emperors such as Peter the Great and Ivan the Terrible.

Who were all those “geniuses”?

According to the analysis of the brain, which began to be developed in the 19th century, Marx, Lenin, and Stalin would be classified as “idiots.” Stalin combined their idiocy with the cruelty of Peter the Great and Ivan the Terrible and tortured to death those who threatened to take his power.

The first American book describing the analysis of the brain was published in 1922, and the long list of books on the subject goes on and on.

If anyone in Russia had dared to write a book arguing that not only were Karl Marx, Lenin, and Stalin not men of genius, but, according to the brain analysis, they were “idiots,” the author of the book, just as the authors of hundreds of similar books, would have been tortured to death, in which process the infamous Union of Soviet Writers had outstanding “specialists,” a good match to those of the time of the Empires of Ivan the Terrible or Peter the Great, both of whom would mentally be classified as “idiots.”

But how did Stalin manage to sustain the economy?

The six-storied building in Moscow in which I lived with my parents had been built before 1917 and was owned by a Danish “capitalist,” who fled to his native Denmark as soon as the ruthless idiot Lenin came to power. Six families were settled in what used to be (on each floor) a four-room one-family apartment, to share one kitchen and one bathroom. My father was a member of the “Union of Writers,” and my mother a professor of medicine.

The emperors of “Soviet” Russia had to make sure that the people they needed such as my parents were provided with “excellent living conditions.” Our family had moved into what used to be the former owner’s library. Our guests admired our abode: “My God, what a room—what a beautiful room!” Of course, we had a live-in maid Polina, living with us in the same room, who took care of me and often wept as she recalled how lives of the people in their village had been destroyed for having criticized what was happening to their lives due to Stalin.

To industrialize the historically agrarian country, Stalin was on the cusp of having more urban than rural dwellers for the first time. He needed manpower to carry out his military projects. For this reason, he moved the people from villages and rural areas to big cities and other industrial centers.

The trouble is that with the exception of a few countries which have overcome the war disease against all and everyone, the humankind suffers from that horrible disease — slavery — which appears in different disguises, including calling slavery freedom.

Just read the Marxist-Leninist hymn the Internationale, so named to show that it is international — that it is the hymn of all countries and nations.

This hymn, said to have been written by Marx himself, is especially frightening if we recall that Germany, the motherland of Marx (and Engels and his father, a “capitalist,” who maintained Marx financially), was no more “military” than any other country and was the creator of unique and immortal music.

Says the Internationale: “We are waging a deadly battle against ruthless enemies. And our destiny is still unknown!”