Concerned that Taiwan’s security and sovereignty is being gradually negotiated away to Mainland China, a group of civic organizations has announced a new national strategy to promote Taiwan’s neutrality.

Formally launched on Oct. 25, the campaign is called the “Peace and Neutrality for Taiwan Alliance” and is being led by former vice-president Annette Lu. 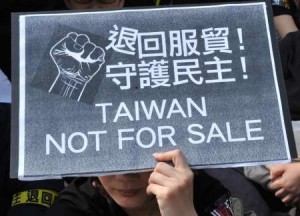 The Alliance will organize a “Legion of Peace Ambassadors” and recruit 10,000 peace envoys in Taiwan and abroad to actively promote its cause and seek support at home and overseas.

So far more than 500 NGO activists, businessmen, and concerned citizens have signed up, paid dues and joined the Legion of Peace Ambassadors. Among them were scores of Taiwanese businessmen based in the United States, Central and South America, Asia, and Africa, who are members of the ruling Kuomintang (KMT) and the opposition Democratic Progressive Party (DPP). One of the businessmen from Texas declared in the meeting that Taiwan’s peace and neutrality is not a partisan issue and should be supported by all Taiwanese who care about Taiwan’s future.

What will it take for Taiwan to become a state of peace and neutrality?

First, the Alliance has been collecting signatures by concerned citizens to propose to the government a national plebiscite on Taiwan’s neutrality. By the end of 2014, 100,000 signatures must be submitted to the government for it to determine that the initiative has sufficient backing. Then, about 1 million new signatures supporting the proposal need to be submitted if the referendum is to be held in 2016, in conjunction with the presidential election.

As Taiwan will hold its municipal and local elections on Nov. 29, Annette Lu has spoken in support of candidates at numerous campaign rallies and concurrently promoted the cause for Taiwan’s peace and neutrality. Because the response of the crowd has been highly favorable, dozens of municipal council members have pledged to join the Legion of Peace Ambassadors to help the cause.

Secondly, prior to the plebiscite, an intensive and extensive debate on the pros and the cons of neutrality needs to be conducted in Taiwan. Such a debate can be expected to generate widespread international publicity and bring attention on Taiwan’s future, much like the independence referendum in Scotland last September. If the majority of voters favor neutrality, the government must announce their choice to the world. In addition, citizens and government will seek international support and recognition, as Switzerland did in 1815 and Costa Rica in 1948.

Some cynics and critics considered the idea of a neutral nation for Taiwan “far-fetched.” They asserted that “spending time and money promoting a ‘neutrality’ pipe dream will not help anyone or achieve anything.”

To Taiwan’s true believers, however, their cause for and efforts toward a peaceful and neutral nation endure, and their dream shall never die. In strategic terms, promotion of Taiwan’s neutrality is a measure of preventive defense to counter Beijing’s unification plot.

Chinese President Xi Jinping is pressuring Taiwan’s Ma government to sign an agreement on “confidence building measures” (designed to terminate U.S. arms sales to Taiwan and do away Taiwan-U.S. security cooperation) and a cross-strait peace accord that will lead to eventual unification. The outcome of the plebiscite and the Taiwanese people’s quest for neutrality is a clear answer to Beijing’s plan to annex the nation.

In 1979, the U.S. officially recognized the People’s Republic of China (PRC), but does not accept PRC’s claim on Taiwan; In doing this, the U.S. severed diplomatic ties with the KMT regime (ROC), which professed to be the government of both Taiwan and Chinese mainland.

For various reasons, mainly not to offend the PRC, the U.S. has been unwilling to extend diplomatic recognition to Taiwan, which it calls a de-facto state, despite Taiwan’s possession of all the prerequisite to be recognized as a full sovereign state.

While Taiwanese people are not oblivious to the U.S. interests, they are also keenly concerned with their destiny and survival as a free people. For this reason, the Alliance is calling for the concerned citizens to exercise their right as the masters of Taiwan to shape and decide their future through a national plebiscite on Taiwan’s neutrality.

As in the case of armed neutrality in Switzerland and Sweden, Taiwan will need to build up its national defense to safeguard its security and neutrality.

Inasmuch as the U.S. and Japan consider a self-ruled Taiwan an integral part of Japan’s security and of vital interest to the U.S., they are against China’s annexation of Taiwan by force or through non-coercive political means. In the wake of a “2+2” meeting between the American Secretaries of State and Defense and their Japanese counterparts in 2005, the two allies affirmed their common interests in safeguarding peace and security in the Taiwan Strait. The U.S., Japan and several Asian nations like the Philippines and Vietnam seem likely to welcome Taiwan’s initiative to move toward neutrality, even if they do not say so openly.

As a state of neutrality, Taiwan is of immense importance to Japan, India, and the ASEAN. It will bolster freedom of navigation and safety in the Taiwan and Bashi Straits, two important pathways for international air and sea transport, with over thousands of planes and vessels passing through these waters and airspace above daily.

The campaign for neutrality is a long journey, and the procedure of a national plebiscite will be complicated and difficult, but the journey of 1,000 miles must start with a first step and now.

If the citizens of Taiwan procrastinate and do nothing, they will get nothing. They should not be caught dangerously off-guard to find Xi Jinping is inducing Ma to deliver Taiwan in a future Ma-Xi meeting in 2015. Taiwan’s concerned citizens must act now to safeguard the nation’s security and sovereignty.