Moscow denies ISIL destroyed Russian helicopters at base in Syria

Moscow is countering reports that four of its attack helicopters at a base in central Syria were destroyed in an attack by Islamic State of Iraq and Levant (ISIL).

Amaq, an ISIL-linked news agency, on May 15 first reported the “burning of four Russian attack helicopters and 20 trucks loaded with missiles inside T4 airport in eastern Homs [province] as a result of a nearby fire,” leading to speculation that it could have been accidental. 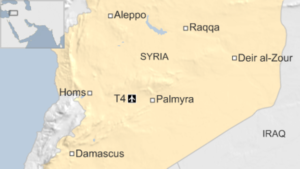 On the same day, ISIL released an image it said showed one of its fighters firing Grad rockets at the T4 base, also known as Tiyas.

Images from global intelligence firm Stratfor allegedly show damaged aircraft and supply depots at the base situated between the cities of Homs and Palmyra.

“The attack, and the considerable losses on the Russian side, stress the continued threat to supply lines for Russia and regime forces,” Stratfor said, adding the images show the damage incurred was likely not accidental.

“A range of separate locations within the airfield were targeted very accurately, with no sign of damage in the areas separating them,” it said. “A single accidental explosion would not have been able to have this result.”

Russia’s Defense Ministry said in a statement that there was no attack on the T4 base and that the Statfor images show damage that “resulted from the battle for this airbase between Syrian government troops and rebels” and had “been there for a while.”

“All Russian military helicopters that are currently in Syria are on the planned mission to destroy terrorists,” the statement said. “[There have been] no losses among personnel at the Russian airbase.”

A U.S. defense official told CNN that it appeared to be an accident that caused a chain reaction of explosions and not the result of enemy action.