While the mainstream media continues to downplay Hillary Clinton’s email scandal to protect their candidate, a group of U.S. intelligence veterans are letting the public know just how serious the situation is.

The 14 intel vets signed a memo saying Clinton endangered national security “by carelessly exposing highly classified information to hackers. She was hacked, and now Russia has some of the nation’s most secret information.” 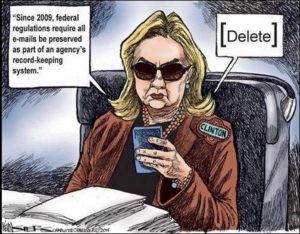 If Clinton were to become president, the memo suggests, “she would be open to blackmail by various government officials, foreign governments and any number of hackers.”

“By all indications, the FBI is slow-walking the investigation and mainstream media are soft-pedaling the issue. As things now stand, most Americans remain unaware of the import of this industrial-scale compromise of very sensitive national security information in Secretary Clinton’s emails,” the document posted to the Global Research site said.

The group, who refer to themselves as Veteran Intelligence Professionals for Sanity, is demanding more timely action from the White House and FBI on Clinton’s case.

The White House has “made excuses for deliberate security violations by Secretary Clinton that would have gotten senior officials like us fired and probably indicted,” the group said. “We look with suspicion at what we see as contrasting and totally inappropriate attempts by the administration and media to play down the importance of Secretary Clinton’s deliberate disregard of basic security instructions and procedures.”

Clinton’s high-profile position is the only thing saving her from years of prison time, according to the memo. The 14 senior officials said they have 400 years of combined experience in working with classified information.

The group said intelligence officials have been imprisoned for less than what Clinton did, citing an official named Jeffrey Sterling who is serving three and a half years after being convicted “with far less evidence than what the FBI has on Hillary.”

“The contrast between the copious evidence – some of it self-admitted – of Secretary Clinton’s demonstrable infractions, on the one hand, and the very sketchy, circumstantial evidence used to convict and imprison Jeffrey Sterling, on the other, lend weight to the suspicion that there is one law for the rich and powerful in the United States and another for the rest of us.”

The memo says Clinton made a deliberate decision not to follow normal procedure and then handled highly classified information carelessly, leaving it vulnerable to hackers.

“Intelligence professionals (in contrast to the occasional political functionary) take the compromise of classified information with utmost seriousness. More important: this is for us a quintessentially nonpartisan issue. It has to do, first and foremost, with the national security of the United States… We believe the American people are entitled to prompt and full disclosure, and respectfully suggest that you ensure that enforcement of laws protecting our national security does not play stepchild to political considerations on this key issue.”

Among Clinton’s over 60,000 emails, including 31,000 deleted and recovered, are at least 22 that contain the most highly classified information, some of which contained information on Special Access Programs (SAP) that contain very high-level clearance material. The info was held on a private server in Clinton’s New York home.

“The mishandling of SAP information can neutralize intelligence programs costing billions of dollars, wreck liaison relationships assiduously cultivated for decades, and get a lot of people killed,” the memo said, adding that Clinton not only broke the law, but ordered her staff members to also break the law.

“Numerous messages both in New York and in Washington have reportedly been erased or simply cannot be found. In addition, the law cited above explicitly makes it a felony to cut and paste classified information removing its classification designation. Retaining such information on a private email system is also a felony. In one of Secretary Clinton’s emails, she instructed her staff simply to remove a classification and send the information to her on her server.”

The memo’s authors said the overriding fact in the case is Clinton broke Federal Law, endangered National Security and the lives of government agents throughout the world.

“So the question is not whether Secretary Clinton broke the law. She did. If the laws are to be equally applied, she should face the same kind of consequences as others who have been found, often on the basis of much less convincing evidence, guilty of similar behavior.”