CAIRO — Yemen has killed a key commander of Al Qaida in the Arabian Peninsula. 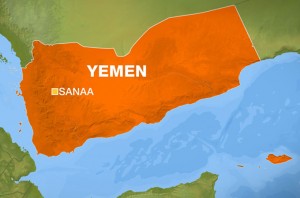 The officials said Al Shabwani, killed in a shootout on late May 8, was regarded as the architect of AQAP’s abduction campaign of Western diplomats.

“The terrorist Al Shabwani was one of the most dangerous Al Qaida terrorists and one of the group’s leading members who planned and participated in kidnappings and assassinations in the capital, targeting policemen and a number of foreign nationals,” a security official told Yemen’s official Saba news agency.

The official said Al Shabwani was ambushed by security forces in Sanaa. Al Shabwani was said to have opened fire and killed by the forces. A man next to the AQAP chief was also killed.

The death of Al Shabwani was part of a Yemeni campaign against AQAP.
Yemen also reported the killing of an AQAP bomb expert, identified as Taimor
Dagestani,” a reference to his native Russia, in the southern province of
Shabwa.

Later, two alleged French members of AQAP were arrested at an airport in
the Hadramout province. Officials said 70 percent of AQAP consisted of
foreign fighters.

AQAP, led by Nasser Al Wuhayshi, has sought to avenge the killing of Al
Shabwani. On May 9, AQAP stormed the presidential palace in Sanaa in an
attempt to assassinate Defense Minister Mohammed Ahmed. Later, the Interior
Ministry reported the reinforcement of security forces throughout the Yemeni
capital.

Al Shabwani was said to have sent gunmen to abduct Western diplomats,
including Americans. In April 2014, the U.S. embassy stopped an attempted abduction of two of its
officers in Sanaa.

“We can confirm that, last month, two U.S. embassy officers in Yemen
fired their weapons after being confronted by armed individuals in an
attempted kidnapping at a small commercial business in Sanaa,” State
Department spokeswoman Marie Harf said on May 10.