Taking Trump at his word, illegals swarm across southern border 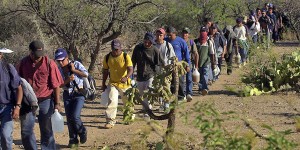