Hillary’s e-mails: What is obvious, but not openly discussed

Not a lot that is being said by the talking heads makes sense in the case of Hillary Clinton’s e-mails.

First of all, everything would tell us that any domestic or foreign political figure would be interested in the very fact that a specific subject had reached the Himalayan heights of the Secretary of State’s eyes. She is, after all, in addition to her vast power and influence as the decision-maker after The One in foreign relations matters, one of the most powerful figures in government.. And, of course, the secretary of state is the fifth in line to the presidency in the event a catastrophe eliminates the vice president, the speaker of the house, the majority leader of the house, and the pro temp leader.

It may well be, as many government officials have long argued, that too many documents are “classified”, said to be of lesser importance than their originator believed when he accorded them a secret status. But, as is obvious, that decision must be left with the originator of the document, not to be trifled with by the recipient. And as some of the released e-mails indicate, not only did Clinton disregard the classification, but she instructed subordinates in the State Department to remove the classification, acknowledging that she knew their significance even if she did not agree with its evaluation. 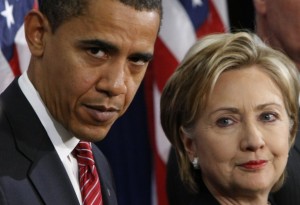 It is probably impossible for third parties, unless they are directly involved and know the subject matter, to evaluate the damage done by Clinton’s purposefully declassification. It is not even self-evident why she did it. But one has to assume that there are such things as state secrets, many of them in fact, and the necessity to prevent their disclosure to enemies foreign and domestic is an obligation all government employees or political appointments take on in their oath of office as well as the common sensical performance of their duty. This, Clinton did not do.

Again, a good deal of speculation has gone on about whether the continuing inquiry into the matter of her e-mails will result in an indictment by the attorney general of this administration.

It is, of course, possible that Loretta E. Lynch., who after all was confirmed with a bi-partisan vote based on her record for judicial perspicuity and balance, will proceed to authorize a prosecution after the Federal Bureau of Investigation [FBI] inquiry is completed with evidence for an indictment of Clinton. Its results according to all the speculation in Washington would seem to lie in that direction.

But it appears for her to do so would require great political bravery, and probably self-sacrifice, judging from the President’s TV interview April 10. In that interview, he made it clear that he already has taken a decision that nothing in the investigation would incriminate Clinton.

It bears noting, of course, that for a former supposed university law professor – of course, he was instead a part-time instructor and then a rather poor one by all accounts – the President has violated one of the principal axioms of executive conduct.

That is that no executive should offer a public appraisal of a future verdict while any judicial or police inquiry is under way.

He has done it, of course, repeatedly. Sub judice in the law, means according to the dictionary, “under judicial consideration and therefore prohibited from public discussion elsewhere”. That would include, and above all, by the president of the United States as the chief executive officer and enforcer of our laws.

Last, and perhaps most important, for some time the Mainstream Media have been talking about the Attorney-General’s office and the Justice Department as another branch of what has until now been considered a three part government, executive, legislative and judicial. That still remains the case.

The Justice Department and its head under President Obama remains, as it has always been, a part of the president’s cabinet – not mentioned in the Constitution. And, therefore, it is under his jurisdiction and control. Given his now infamous public statement, it seems unlikely that any justified prosecution of Clinton will be pursued for whatever miscarriage of justice. At least not until 2017 at the earliest.

but not openly discussed, Hillary’s emails: What is obvious, WorldTribune.com