TEL AVIV — Israel’s military has formed a list of banned targets of Hamas and its Palestinian militia allies in the Gaza Strip.

Military sources said the Israel Air Force and Army drafted a joint list of sites that contain rockets and enemy forces immune from attack. They said the sites were those of schools, mosques and hospitals where civilians were taking refuge amid the Israel war in the Gaza Strip. 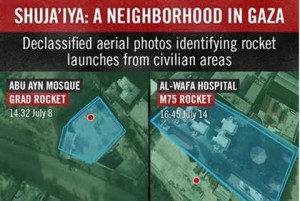 “We are talking about at least 50 targets that we simply cannot strike, although we know exactly what weapons and which terrorists are operating there,” a source said.

The sources said the list has been updated on a daily basis during the Hamas war. They said commanders acknowledged that Hamas was aware of the military’s immunity list and was firing rockets from those facilities.

The restrictions on Israeli air strikes were said to have been instituted from at least 2009. On July 25, a reserve Air Force officer, Ariel Horowitz, recalled operating unmanned aerial vehicles over the Gaza Strip in search for an insurgent.

The disclosure of the military’s banned list came before a rocket slammed into a United Nations school in the Gaza town of Beit Hanoun on July 24. At least 15 people, many of them civilians who sought shelter, were said to have been killed.

The Israeli military, held to a unilateral ceasefire, has disputed Hamas claims that the civilians were killed in an Air Force strike. The military, however, said it repeatedly urged the International Committee of the Red Cross to evacuate the UN school amid Hamas rockets that landed near the facilities.

“Last night, we told Red Cross to evacuate civilians from UNRWA’s shelter in Beit Hanoun btw 10 a.m. & 2 p.m.,” the military said. “UNRWA & Red Cross got the message. Hamas prevented civilians from evacuating the area during the window that we gave them.”

The United Relief and Works Agency has acknowledged that Hamas used at least two UN schools to store rockets. In both cases, UN staffers returned the rockets to Hamas.