The difference a day makes: How Saudi students in the U.S. dealt with April 15, 2013

Almost a million foreign students, the future leaders of their counties, are attending American universities. The following is the true story of how the Boston Marathon bombing one year ago today, on April 15, 2013, shocked a group of such students in southern California.

“Lunch time!” a smiling Saudi Arabian student said, carefully and proudly articulating his newly-acquired English language skills. I had just wrapped up my English as a second language (ESL) intermediate level academic writing class. Students were grabbing their backpacks, asking what their homework was for the third time and wishing me a good day as they always did. I gave the smiling student at the door the universal sign for ‘ok’ and said, “Good job!”. He beamed, then carefully repeated the words, “Good job” as he walked slowly down the narrow hallway holding his iPad. 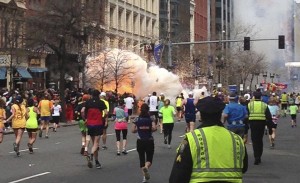 I walked into the kitchen to grab my lunch, but before I could even sit down, eight or nine students rushed in, grabbed the remote control and hurriedly turned on the television. My usually animated and jovial Saudi students had suddenly become quiet, serious and anxious. The young man who held the remote was visibly trembling. “Teacher please, look at this.” I could hear voices all around me, filled with urgency and concern. But, distracted by my stomach, I joked,“What’s going on? Did Barcelona lose their match?” Little did I know about the shocking events that were taking place in Boston.

Unfolding before our eyes were indescribable and repeated scenes of explosions, shock, terror, confusion, destruction, and death. We stood next to each other and time stood still. Listening to the reports as they streamed in, we covered our mouths in horror and disbelief. We stared transfixed at the graphic images of people being knocked off their feet, running frantically through smoke and chaos, screaming in terror.

Panic, fear and disbelief were not only in Boston that day. Such responses were being expressed on my Saudi Arabian student’s faces. Saudis constitute the majority of foreign students at our school. Memories of 9/11 raced in my head. My students could not have been more than 7 or 8 years old at that time, yet standing there with them, I knew they had a very real understanding of the consequences of that day, and the meaning of being not only Saudi Arabian, but Muslim in post-9/11 America.

“Don’t be Saudi. Don’t be Saudi. Don’t be Saudi” repeated a visibly shaken student standing very close to my left. His voice was trembling, but his tone was almost trance like. I turned to look at him sharply, and in that split instant, the expression on his face said it all. All at once, a tremendous sense of anxiety, apprehension, tension and fear mixed with compassion and sadness filled the room. “Teacher, please say it wasn’t a Saudi who did this.”

“Let’s not jump to conclusions”, I said as I looked around the room which was quickly filling up. Many students were perplexed, grasping to understand the English and seeking quick understanding and explanations in Arabic. The intense gravity of the situation was clearly palatable. Two Saudi students standing closest to the television were texting furiously, their hands visibly shaking. I heard the familiar sound of incoming Skype calls going off throughout the room and watched other students hastily run to more private areas, eyes fixed on their cell phones and saying loudly, “Yallah, yallah.”

“All our families are calling from Saudi Arabia” a young woman standing to my right said quietly as she furrowed her brow and refolded her hijab tighter around her face as if summoning up courage. “My mom has already called me three times. She’s really worried about me. My uncle keeps calling me, too.” Quietly, voices praying softly in Arabic filled the room. My heart prayed for all of us. And, in that brief time and space, I couldn’t help but feel the impact of experiencing 9/11 from my Saudi students’ eyes.

According to the March 2013 issue of U.S. News and World Report, there are 71,000 students on scholarship from the Kingdom of Saudi Arabia. Since its inception in 2005, more than 180,000 Saudi students, men and women, have had the opportunity to study and live in America, Europe or Asia. These expert authors from the Rafik Hariri Center for the Middle East state this is a unique and strategic opportunity to build cultural and social bridges, shatter distorted stereotypes of each other, promote greater and deeper understanding, and build hope for sustainable peace. Last month, the White House confirmed approximately 80,000 Saudi students are in the United States representing Saudi Arabia’s future political, business, and social leadership.

First impressions count. I have been teaching hundreds of these Saudi students for several years. Equipped with a master’s degree and 25 years of foreign language teaching and raised abroad in a Foreign Service family, I have learned that deeply embedded in the exchange of minds, ideas, and thought processes are rare opportunities to understand different perspectives, harness new insights, and integrate essential information and knowledge.

I have found a large majority of these young, hyper-connected and technologically savvy Saudi students to be open and excited explorers fascinated by their new surroundings. Some of the ‘new cadre of leaders’ I have had the privilege of teaching have lofty personal dreams and professional goals, as well the courage and determination to follow them. For example, among the increasing number of women in my classroom is one young woman determined to become the first Saudi woman diplomat, two other young women aspiring to earn Master’s degrees aimed at improving special education at schools in their home cities. Most young Saudi men are eager to pursue careers in business and find alternative energy solutions through engineering and science; others are gifted with creativity, innovation and compassion, and are learning skills to professionally document and market a positive image of Saudi society and culture through media. As fate would have it, the very day media sources confirmed the bombers were Muslim, the Friday of that terrible week, was the day we had tickets to our most popular time-honored traditional American cultural and social event: the rodeo.

“Teacher, are we still going to go the rodeo?” a student asked me anxiously as we walked back to resume class. I snapped out of my thoughts. “Think positive!” I told her with a smile. I’d been wearing a cowboy hat all week gearing them up for our highly anticipated trip. My students had been extremely engaged learning about Westward Expansion. We had explored topics ranging from the brave Sacajawea, the talented Annie Oakley, and founding of Latter Day Saints, to stories about the tragic Donner Party and the mysterious Winchester Mansion.

We made it to the rodeo. And, rest assured, anticipation about going was peppered with intense discussions about race, ethnicity, religion, and stereotypes. Our decision had been based on many, many lengthy discussions, and a promise. I assured my students I would be with them and stand next to them, especially the hijab wearing women, whom I will forever feel were the most courageous. Freedom is what makes America great, I kept repeating to them…. this is what we are learning in our classrooms. The freedom to choose what we say, where we go, what we wear, and which religion we practice; the freedom to have the right and the privilege to be respected … and to be safe.

To say the students were simply fascinated, enthralled, and engaged with their rodeo experience would be putting it mildly. By the end of our barrel-racing, steer-wresting, team- roping, kids- stick- horse races, and prize-bull- riding evening, almost everyone wound up wearing a cowboy hat, practicing their English, and making new friends amidst the rich social and cultural beauty of our great American West.

As we got on the bus tired and dusty, but extremely content, a Saudi student smiled broadly. “Did we ‘cowboy up’?” I grinned back at him and tipped my hat. “ Heck, yeah! We did. I’d say we all took the bull by the horns,” I answered.

Did I mention the thousands of powerfully impacting images of happy Saudi (and Chinese) students that traveled across the globe on social media at the speed of light to family and friends in Beijing, Guangzhou, Qingdao, Taiwan, Riyadh, Jeddah, and Mecca that night?

Tamara Zuniga-Brown teaches advanced American English and culture to foreign students, most from the Middle East and China, prior to their entering American universities. She comes from a diplomatic family and was educated abroad in eight countries.

2013, Boston Marathon bombing, The difference a day makes: How Saudi students in the U.S. dealt with April 15