America in its shadow: Unlike Pearl Harbor, the dark force behind the September 11 direct attack has yet to be defeated

Hijacked aircraft slammed into the Twin Towers of the Word Trade Center shattering the myth that terrorism “can’t happen here.” Before long, the towers were like two belching black smokestacks set against the azure blue sky. America was under direct attack.

As I wrote fifteen years ago, and still assert, September 11 2001 became this generation’s Pearl Harbor. The unprovoked attack on, in this case, iconic civilian targets by Al Qaida terrorists would set the political template for a generation much as Imperial’s Japan’s Dec. 7, 1941 attack on Hawaii would trigger a reluctant America’s entry into WWII. 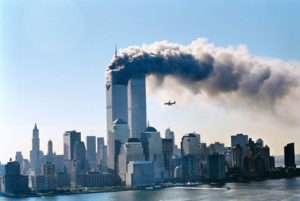 The docile rationalization “it can’t happen here” literally went up in smoke on September 11.

The fundamental difference between the two attacks was that in 1941, the swarms of attacking aircraft carried the symbol of the red rising sun, and the aggressor had a home address: Japan.

In the case of September 11, the shadowy terrorist Al Qaida network was then based in the Islamic Emirate of Afghanistan, which had become home base for the Osama Bin Laden network.

Stated another way, we knew where to find to the perpetrators of Pearl Harbor whereas responding decisively to Al Qaida has assumed an ongoing war against shadows in the rugged mountains of Afghanistan and beyond.

The counter thrust against radical Islamic terrorism remains the conflict of a generation; we may be only about half way through.

But while we look back fifteen years, there are some quarters who will smugly say, fifteen years after the Dec. 7’s, Day of Infamy, we were no longer fighting Japan nor Nazi Germany.

True. That’s precisely because both aggressive regimes were soundly defeated by the Big Five allies, the USA, Britain, France, Nationalist China, and Russia.

So if we look at the world of say 1956, namely fifteen years after Pearl Harbor, both Japan and Germany were being rebuilt as democratic and strong socio/economic systems. Both had become American allies, and both had become model democracies.

This is not the current case with the radical strain of hatred and violence which has hijacked parts of Islam. Al Qaida or the Islamic State of Iraq and the Levant (ISIL) and a gaggle of other fundamentalist groups are symbols of global hate, intolerance, and hideous violence.

These militants are far from vanquished despite the boastful hubris from the Obama Administration that we’re beating them. The problem is far from contained or resolved.

Indeed the danger has widened and spread throughout the Middle East and Africa: Iraq, Syria, Libya and Afghanistan.

Yemen, once the poster child for Obama’s moderate Muslim policy, is wracked by brutal civil war.

In Africa, Nigeria, Somalia and Mali are torn asunder by extremism. So are we really safer?

Regrettably, a September 10, 2001 mentality still rests in much of the American psyche; well it happened, but can’t happen again.

Addressing last year’s UN General Assembly session, King Abdullah II of Jordan decried the violence between militant Islam and the world calling the “crisis a third world war, and I believe we must respond with equal intensity.” He spoke of the khawarej, the extremist outlaws who “use religion as a mask.”

The Jordanian King warned tellingly, “Extremists rely on the apathy of moderates.”

Memories of that fateful day still flood my memory when I see the lights of lower Manhattan and recall the area that became known as Ground Zero. Three thousand innocent civilians from twenty countries were killed that cursed day. Some 343 New York Fire Department members and countless first responders lost their lives trying to save them. Even now sometimes when I see an aircraft flying a little low in the traffic pattern on a clear day, I have this flash-back to September 11th.

Happily since then, New York has amazingly rebounded and shown its defiant resilience.

The current presidential campaign holds two competing visions both hawkish but nuanced. One claims that the problem is controllable and contained. The other asserts that we are yet to truly counterattack the menace. America’s Terrible swift sword is yet to vanquish the enemy.

Indeed by the Pearl Harbor anniversary, America will have chosen its new president.

Yet even on the clearest and most beautiful Autumn days, September 11 shadows and the symbolism still linger.

America in its shadow: Unlike Pearl Harbor, Septebmer 11, the dark force behind the September 11 direct attack has yet to be defeated, WorldTribune.com