Amazon has submitted to a Chinese Communist Party (CCP) demand that negative customer ratings on a book containing a collection of supreme leader Xi Jinping’s speeches and writings not be permitted, a report said. 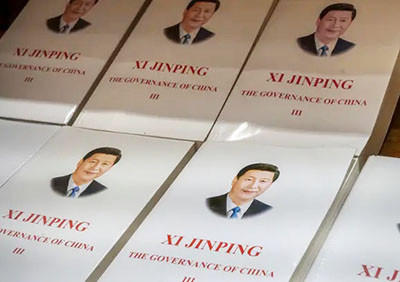 It is all part of Amazon’s strategy of catering to the communist rulers in Beijing in order to grow its business in China’s huge market in which people have only commercial freedom, analysts say.

Amazon is partnering with the CCP and a propaganda arm of the regime for a venture dubbed “China Books.” The partnership was described as a “key element to safeguard” Amazon’s relationship with Beijing, National Pulse reported on Dec. 24, citing an Amazon internal memo.

In the case of Xi’s book, “The Governance of China III”, “the issue was anything under five stars,” National Pulse cited a company insider, who detailed how Amazon caved to Beijing’s demands, as saying.

Xi’s book was reportedly listed as a bestseller on China Books even though it showed a sales rank of 1,347,071.

“Several titles published under the China Books initiative were designed explicitly to amplify Chinese Communist Party propaganda and fake narratives about issues including the treatment of Uyghurs in Xinjiang and the origins of Covid-19,” National Pulse noted.

According to a Reuters report:

One book extols life in Xinjiang, where United Nations experts have said China interned one million ethnic Uyghurs in a network of camps. The book – “Incredible Xinjiang: Stories of Passion and Heritage” – discusses an online comedy show situated in the region. The book quotes an actor who plays a Uyghur “country bumpkin” saying that ethnicity is “not a problem” there. That echoes the position of Beijing, which has denied mistreating minority groups.

Some books portray China’s battle against the COVID-19 pandemic, which began in the Chinese city of Wuhan, in heroic terms. One is titled “Stories of Courage and Determination: Wuhan in Coronavirus Lockdown.” Another begins with commentary from Xi: “Our success to date has once again demonstrated the strengths of CPC (the Communist Party of China) leadership and Chinese socialism.

National Pulse cited an Amazon internal briefing from 2018 which describes several “Core Issues” the company has faced while operating in the communist nation, including “ideological control and propaganda is the core of the toolkit for the communist party to achieve and maintain its success.”

“We are not making judgement on whether it is right or wrong,” the document added.