You know Big Media is fully invested in a narrative when it cuts out a comment from one of its all-time heroes.

In an interview with ABC’s “Good Morning America”, former President Barack Obama said he was opposed to open borders because they are “unsustainable.” 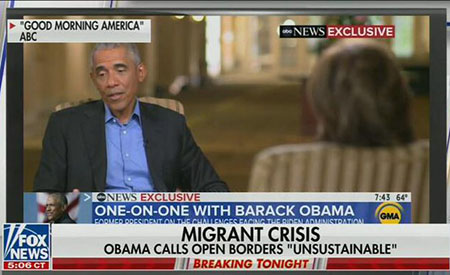 ABC did not allow that part of the interview to make it on air.

“Immigration is tough. It always has been because, on the one hand, I think we are naturally a people that wants to help others. And we see tragedy and hardship and families that are desperately trying to get here so that their kids are safe, and they’re in some cases fleeing violence or catastrophe. At the same time, we’re a nation state. We have borders. The idea that we can just have open borders is something that … as a practical matter, is unsustainable,” Obama told co-host Robin Roberts in the portion that was cut out of Tuesday’s broadcast.

ABC, of course, did air a portion of the interview where Obama criticized congressional Republicans for not passing comprehensive immigration reform. The part where Obama praised his own administration’s approval of temporary legal status given to Haitian migrants following the 2010 earthquake there also made it on air.

The Biden administration was slammed last week after the clearing of an encampment consisting of up to 17,000 Haitian migrants at the border led to thousands being released into the U.S., with court hearings scheduled that most will never show up to.

“ABC World News Tonight” also excluded Obama’s “open border” remarks in its coverage on Tuesday. The network newscast devoted less than a minute to the interview, instead focusing on the groundbreaking of the Obama Presidential Library in Chicago.

ABC included Obama’s full comments in the online article about his interview. His comments about open borders being “unsustainable,” however, were buried in the 13th paragraph.

According to the U.S. Border Patrol, encounters at the border are up more than 500 percent in 2021. Over 200,000 migrants were encountered in the month of August alone.

ABC cut out part of their own interview with Barack Obama where Obama said he opposed open borders and said it was “unsustainable.” https://t.co/UbOs8y0IgB

ABC News cuts out Obama comment that open borders are ‘unsustainable’ added by Editor Two on September 29, 2021
View all posts by Editor Two →